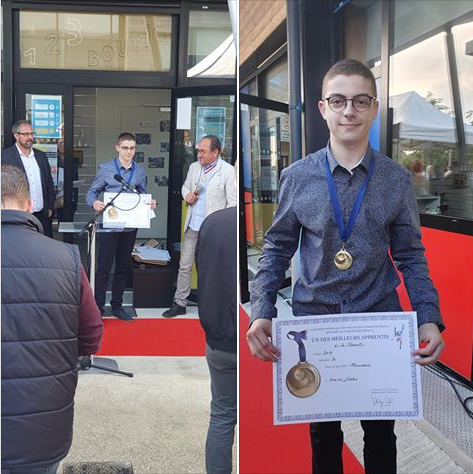 Nicolas Daniel - Winner of the Gold Medal in the departmental contest for the best apprentice in France.

This year two students in their final year of Technician “Joiner/Fitter” participated in a contest for the Best Apprentice of France (MAF). After more than three months of intensive work since early January, in addition to the workshop hours of their timetable, they worked on Wednesday afternoons and even came for a week during the February holidays to give the best of themselves in order to make a product worthy of the contest.  With the permission of their work experience tutors, they were able to finalize the work in time during their work experience, the deadline being Tuesday, April 02. A jury, composed of the Best Craftsmen of France, Companions and renowned craftsmen, met Thursday, April 04 at the Apprentices Trade School in Barbezieux to evaluate the works of the Charentais for a possible qualification for the regional heats. The criteria are precise and a national standard is applied. At the end of the rating, the jury liked the works provided by Nicolas Daniel and Cédric Brunet. The fact that our two young people were able to complete the work on time was for them already admirable, as this was the first organization of the contest in Charente. In the end, Cédric can congratulate himself for having a slightly higher mark more than average, which is remarkable for this type of contest. As for Nicolas, we can all congratulate him because his rigour and his perfectionism allowed him to obtain a score above 18. The jury was amazed by the quality of his work, the plan and the written file he provided.